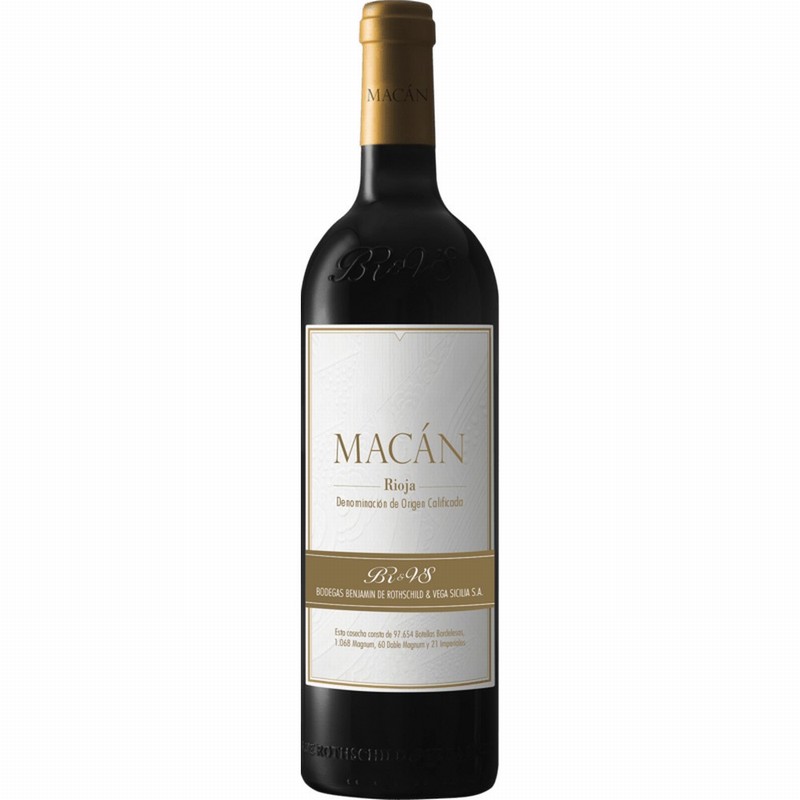 Macán is a modern and very personal take on the premium quality signature wines of the Rioja DOCa region. It is a commitment to finesse, elegance, complexity, and potency. It is also the standard bearer for Bodegas Benjamin de Rothschild & Vega Sicilia, the project launched by Tempos Vega Sicilia and Compagnie Vinicole Baron Edmond de Rothschild in 2004.

2009 saw the first vintage launch to market. Knowledge, effort, patience, and a desire for constant improvement have helped to grow a project that currently resides on a 100-hectare asset containing high-quality vineyards and cutting-edge production facilities that combine technology, tradition, and innovation.

Macán is made only from grapes of the Tempranillo variety. The grapes come from a meticulous selection of mature plots found on high terraces with poorly developed gravelly, calcareous clay soils.

The 2017 vintage definitely posed a challenge given the frost on 28 April. Having to adapt, from the configuration of the tanks to being particularly careful with extraction during fermentation, and lastly during pressing operations, whereby we kept them separate and refined them prior to blending in June. The foudre played a very important role in refining the tannin’s texture during ageing and the barrel enabled us to work on the sweetness, using 50 % new barrels.

The winter of 2017 was mild and moderately dry. December and January were both cooler and more inclement, but the second half of February saw high temperatures (almost spring-like). 2017 will always be known for the late frosts that affected crops across the northern half of Spain. The BR-VS plots in particular received a light frost in San Vicente de la Sonsierra on 20 April. The advection frost on 28 April (a cold snap from northern Europe) was more serious, affecting areas of the vineyard.

Intermittent rainfall and good temperatures during the spring months helped speed up the vineyard’s growing cycle to some extent. Rainfall increased again in June, with over 70 litres per square metre. July saw storms with some hail damage, although the good wind and temperature conditions over the next few days meant that the damage and impacts healed correctly and quickly.

Subsequent precipitation in late August and early September helped to mitigate water scarcity in the medium and deep radicular areas. The rainfall during those months favoured both plant growth and the normal development of the grape’s ripening process. Harvesting was normal, running from 15 to 27 September, with good weather conditions.

This wine is suitable for drinking now, but it can be aged for up to 15 years if stored in the ideal conditions.