Amps – Celebrating Over A Hundred Years! 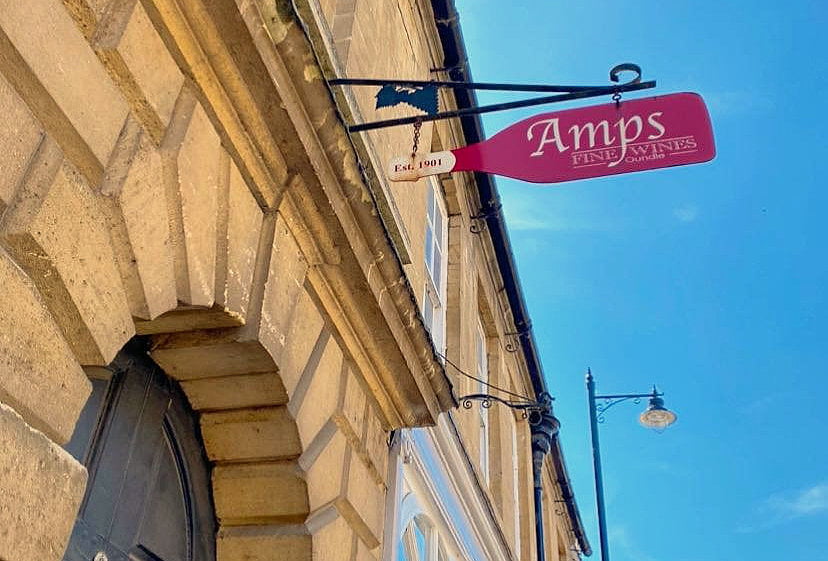 For over a hundred years we’ve been proud to trade as a family business, and would love you to read on to learn more about us and our history.

To celebrate over a hundred years, we decided to do a little research into the Amps name and family history. It is thought that our name may have originated from Ampthill in Bedfordshire, certainly in the 16th and 17th centuries there were a large number of Amps in Bedfordshire, but the majority are now based in Cambridgeshire. Fantastically, we have traced our direct line back to approximately 1660 – the time of Oliver Cromwell!

The direct father/son list at the moment is as follows: 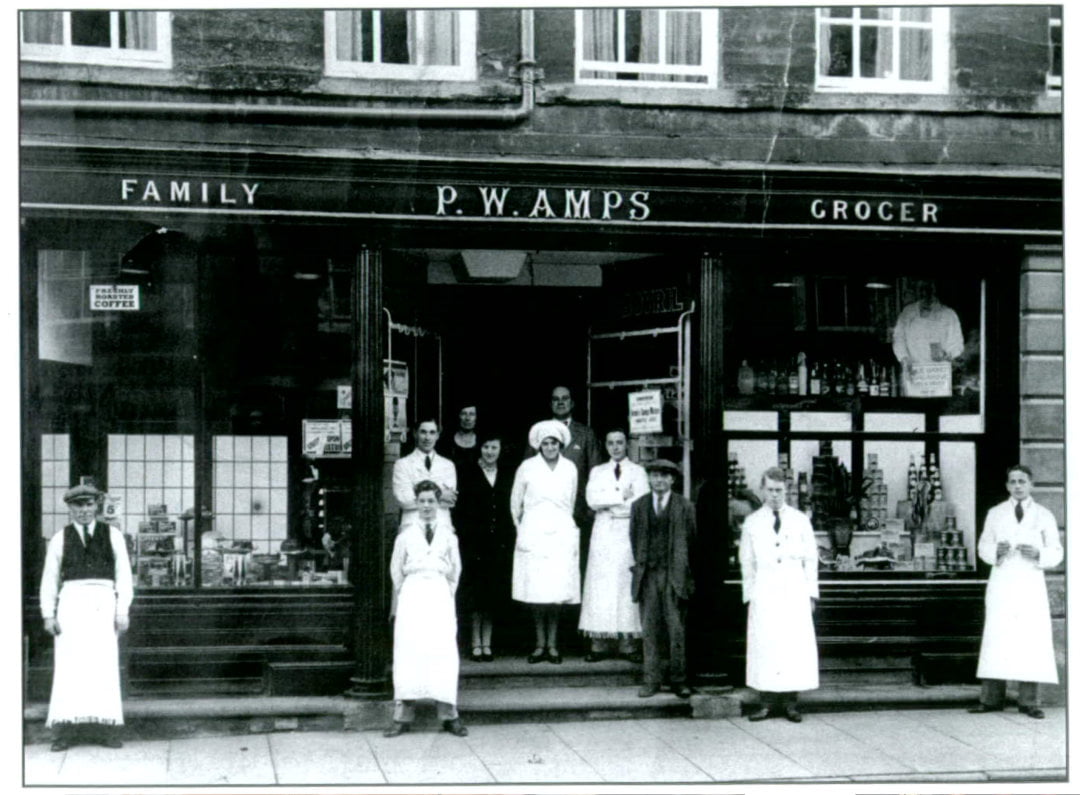 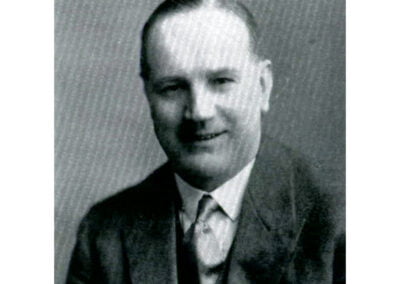 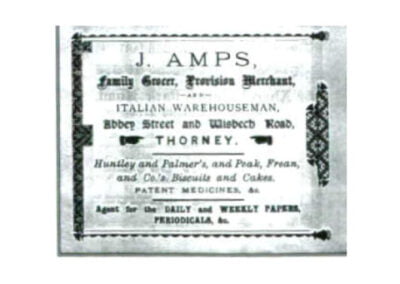 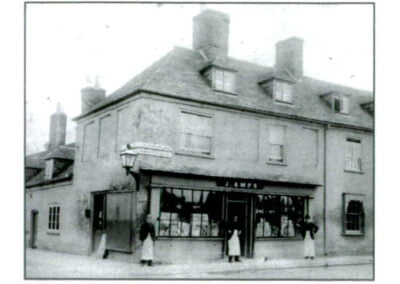 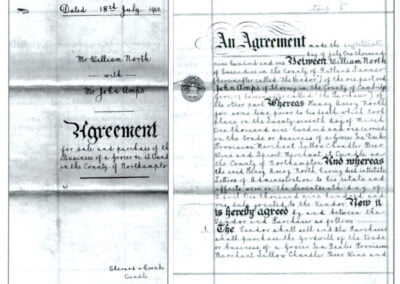 John Amps, Philip’s great grandfather, opened the business in 1901. Back then it was described as a family grocers, provision merchants, wines and spirits trader and tallow chandlers. However, this was not his first business as he had been trading for ten years previously on the corner of Wisbech Road and Abbey Street, Thorney.

When John Amps moved to Oundle in 1901, he was 36. He left his younger brother in charge of the Thorney shop, and, according to local knowledge ‘Billy Amps’ remained there until 1922.

John quickly saw the opportunity for enterprise in the bustling market town of Oundle and purchased the grocery, wine and spirits merchants business therein, following the death of the previous proprietor. We know that the shop had been trading in beer and wine since at least 1801!

In 1901 John had been married for eleven years to Margaret Grimble Neal and they had two sons, John Harold and William Percy. At this point, the population of Oundle was approximated at 2500 and now, over a hundred and ten years later, boasts an estimated population of around 5,800 people – over double that! In 1901, however, the town was host to at least five grocer’s shops, fourteen public houses and seven beersellers (home brewed ale to be consumed off the premises).

Our shop at that time would have looked virtually the same outside then as it does today (where it is currently occupied by Tescos), but inside would have been very different indeed, with a large square room across the full width of the front of the building with two other rooms behind the shop for domestic use. The family would have occupied the rooms on the first and second floors and you can still see the bricked up entrance down the side of the building, as you travel to our current shop. The business had one distinctive feature, which was its telephone number – number ‘2’ as 6 Market Place had the second phone in Oundle!

Deliveries were originally made by horse and cart, and the last driver to use the horse was Ernie Rose – but he also had the honour of being the first to use our new van! Our vans have changed a little over the years, however…

John Amps died in December 1928 and his wife Margaret died the following year, leaving youngest son Percy to run the business where it went from strength to strength. His son Michael has many fond memories of the variety of goods they sold and how differently things were stored and delivered from today. One memory is of the salt deliveries arriving in six ton trucks via British Rail, which were then carted by horse drawn carts to our Salt House to be stored. A fire was kept alight throughout the winter in the Salt House to keep the salt dry – which was a perhaps a little bit of a risk, considering the next room was the paraffin store! 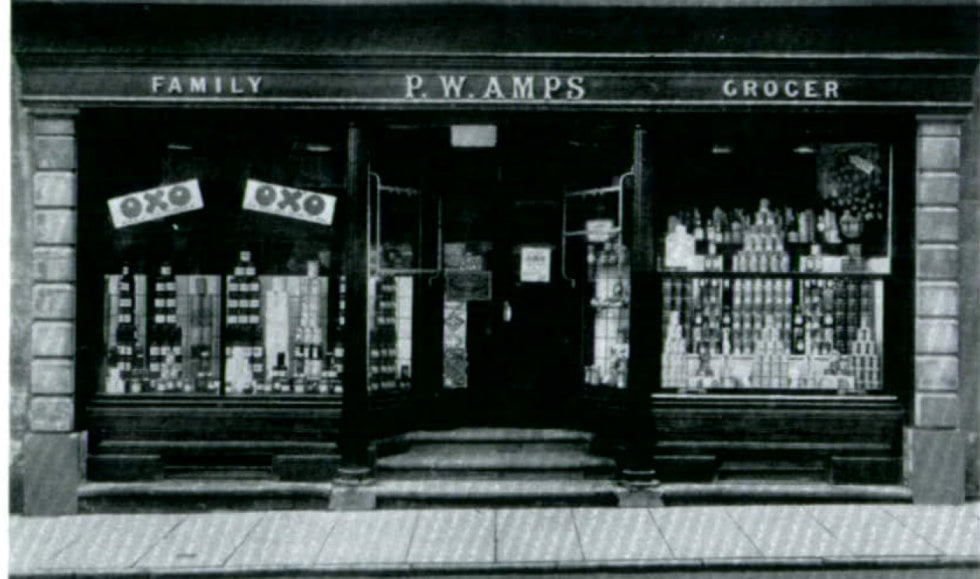 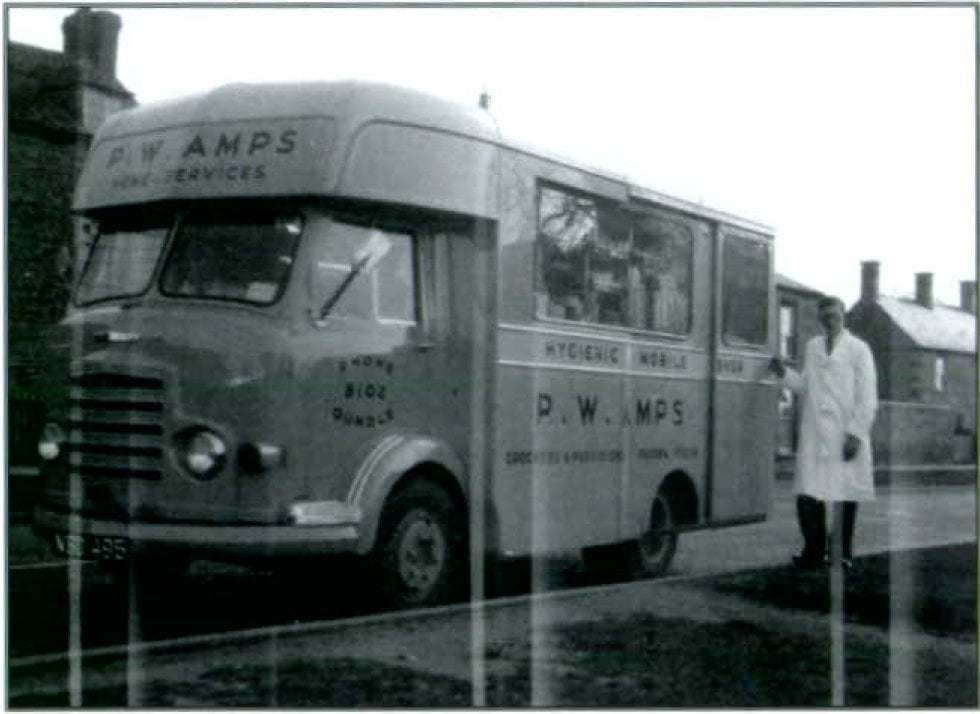 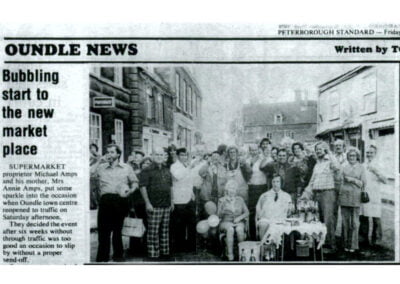 Michael started in the business when he left school, with Percy and Michael deciding to form the limited company P W Amps Ltd on 10th May 1957.

One of the changes Michael made to the business was introducing a mobile shop to cover the outlying districts. Michaels mother, Annie, was still very much involved in the shop at this stage, and when Percy died in April 1963 aged 66 it was decided by Michael and his mother that a major refurbishment was due. All the mahogany counters, shelving, drawers etc were removed and modern shelving, refrigerators etc were installed for self-service shopping.

In 1972 even further major refurbishments took place and the shop was extended backwards to join up with the old warehouse, creating a supermarket with offices to the rear and a storage area under the new shop floor. Our supermarket was very highly rated by the local people. It provided a wide range of high-class products.

The ’80s saw a lot of changes to the business. Philip, one of Michael’s sons, was determined that the family business would continue to have the reputation of being the very best in the district. Michael suggested that Philip should take a keener interest in wines because he felt that wine was going to become more popular in future years!

Philips interest in wine not only became important in work but also a serious hobby. During this time the wine section within the supermarket had grown dramatically, with the wine and spirits outgrowing the space available. Philip eventually convinced his father to separate this section from the main grocery shop. A derelict building was purchased and converted for the purpose behind No 6 Market Place. These premises were opened on 22nd April 1993. 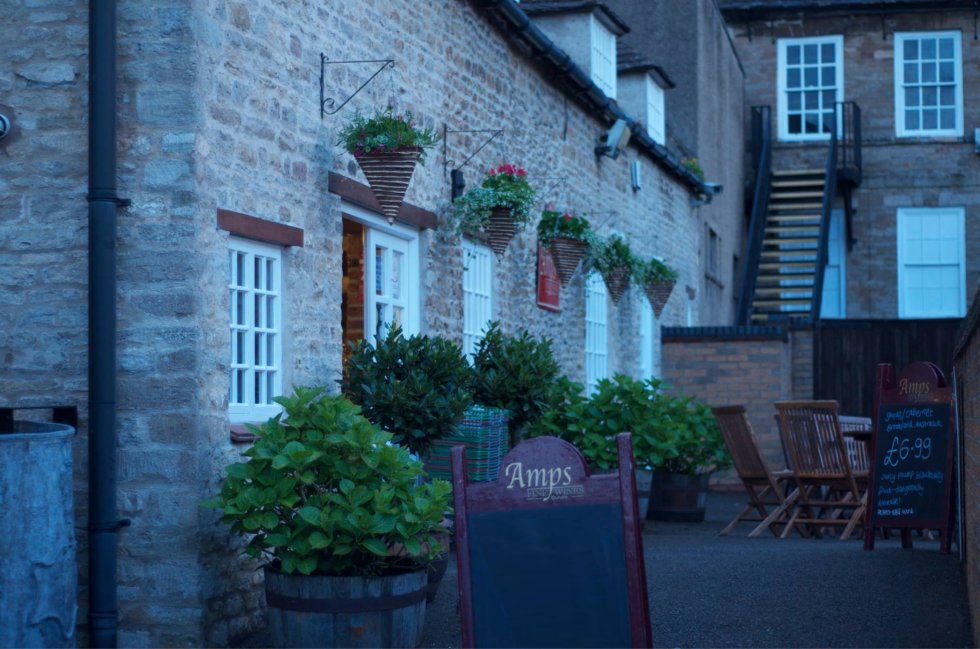 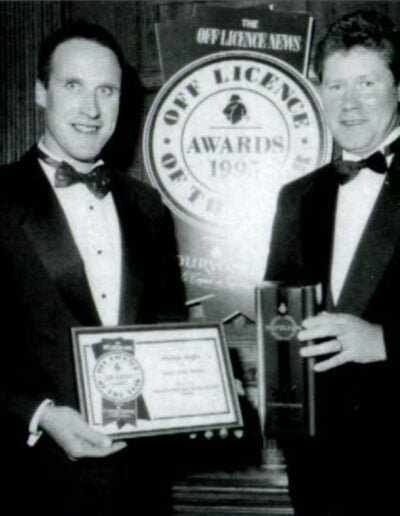 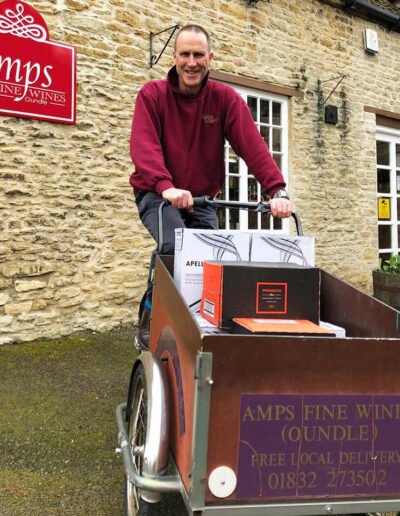 Wine Business On The Up

Michael and Philip decided to close the grocery business later that year, following the development of two large supermarkets in Oundle, and they devoted all their energies to the wine business, with it flourishing to the major independent wine business we are today, with our Oundle shop, website and wholesale side offering the finest in wines from the best in independent winemakers.

Philip’s experience within the wine world has seen him achieve many qualifications, starting with the Wine and Spirit Education Trust exams. He has completed the Certificate course, the Higher Certificate and the Diploma – so only the Master of Wine to go!

Amps Wine Merchants today imports most of its wine direct from the vineyards and producers which we love. We taste all of our wines, only stocking what we believe are the very best in terms of quality, style and value for money.

In 2016 Amps sets up a sister shop at Oundle Wharf offering the same friendly
and knowledgeable service but in a contemporary setting. Combining a passion for wines of character, often from small independent wineries, with total dedication to the discerning wine drinker, the new shop contains a wine tasting machine where customers get to try before they buy. 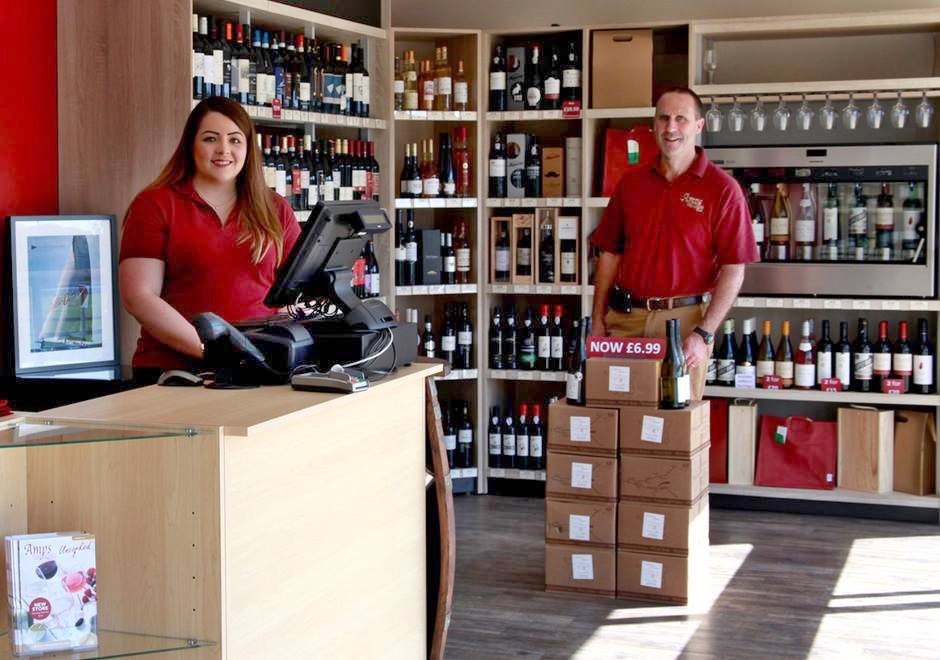